Harvey Mudd College is planning to buy the KGI property currently leased to the BFS in order to build a parking lot. HMC also plans to subdivide the property and sell half to Claremont Graduate University for their new School of Global and Community Health. Read more in HMC’s announcement and a Claremont Courier article.

In yesterday’s Claremont Courier T. Willard Hunter blasts Kelsey McDonald’s March 22nd article, claiming that preservation of the BFS would be a decision “made by mob rule.” It will be interesting to see if the salvo is returned.

Harvey Mudd President Maria Klawe sent a note to faculty and students stating that “CUC has concluded that the only financially viable option for the administrative building is on the First Street site”; i.e., the plans to place CUC Central Facilities on the KGI site have been dropped. Fritz Weis, Scripps College Interim President, also sent to faculty a CUC memorandum affirming this decision.

In yesterday’s Claremont Courier Kelsey McDonald reported on CUC’s plans to build central facilities on the KGI portion of the BFS. Several BFS supporters were quoted, including:

Pitzer Professor Melinda Herrold-Menzies:
“How many cities can actually boast of having within its borders one of the last remaining parcels of coastal sage scrub?”

Pitzer Professor Paul Faulstich:
“The Field Station also provides the broader Claremont Community with a magnificent viewscape and chunk of endangered coastal sage scrub that serves as a water filter for our aquifer and an air filter for our lungs. Physically, ecologically, and psychologically, it serves as a space of healthy natural process that reminds us of the importance of nature in our lives.”

This article was also reported by the Claremont Insider blog. The Claremont Courier article is not available online. 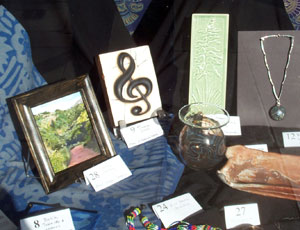 The Friends’ annual arts and crafts silent auction is being held March 2-28 at the Claremont Folk Music Center. Original art and crafts, including paintings, photographs, batik, pottery, glass, and jewelry by local artists and Native Americans can be bid on at the Friends of the Field Station silent auction. The items are on the display in the front window of the Folk Music Center. Bids may be placed inside.

The Students for the BFS painted messages about the threat to the Field Station on Pomona College’s Walker Wall.

Robert Walton, CEO of the Claremont University Consortium (CUC), announced at an all-CUC meeting on February 19 that CUC plans to buy the western 11.4 acres of the Bernard Field Station from KGI and build a new CUC central facility parcel. The new facility would include the physical plant facility now located on First Street; the administrative, business, and personnel offices now located in the Pendleton Building on Eighth Street; off-site storage for the Claremont Colleges Libraries; and a parking lot or structure.

Since CUC was in the process of finalizing plans to remodel the current physical plant buildings it ownson First Street to accommodate these other functions, this plan came as a considerable surprise. The motivating force for the proposal is not completely clear. It seems, however, that the move to the BFS depends on Pomona College buying the First Street property in order for CUC to have sufficient funds to buy the BFS land from KGI. As far as we know, nothing is settled yet, but Mr. Walton told staff that he hoped to complete the sale within the month, so things are moving quickly. For more information, please e-mail bfsfriends@earthlink.edu.