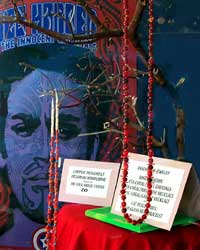 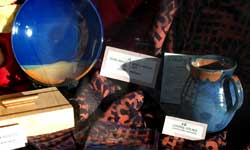 The Friends had an information booth and a game booth at Claremont’s annual Village Venture Arts & Crafts Faire, which was held Saturday, October 25, from 9:00 a.m. to 5 p.m. Many visitors signed up for the mailing list and collected information about the Friends and the BFS.

An October 3 article from the Claremont-Upland Voice reports that the Students for the BFS have resumed meetings. According to spokesman Colin Fiske, “Our concern is that both the consortium and Keck have stated that they eventually plan on building on the field station. We consider the educational value to be greater as a field station because open land is so rare in the L. A. basin and all the environmental and cultural values that are wrapped up in that land."

Fiske continued, “We hope to work with [the Claremont City Council] and see what they can do and what we can do to work through the Council.”

Sheldon Schuster, the new President of the Keck Graduate Institute, stated in an interview with the Claremont Courier, that KGI is not planning to build on the BFS. According to the Courier:

“Not included on the list of challenges, according to Schuster, is breaking ground on the Bernard Field Station site, 11.44 acres of which were deeded to KGI by the Claremont University Consortium earlier this year.

“ ‘No, we’re not planning on building. We’re very satisfied with our present facilities,’ Mr. Schuster said, adding that KGI does not have even long-term plans to build on the parcel of land.

“‘At least at this stage, we have other issues that will keep us busy.’”

As they have each year since their founding, the Friends marched in Claremont’s July 4th parade. They carried signs illustrating some of BFS flora and fauna, including fairy shrimp, coastal cactus wren, white sage, whiptail lizard, and the ever-popular blue dicks. The Friends also had a game booth and an information booth at the City celebration in Memorial Park prior to the parade.